The Flashback Tour is currently on hold. Please check back for details.

You can view the Flashback Press Release here:

By Rich Reaves - Special to the Herald

How's this for a show: Janis Joplin, The Doors, Jimi Hendrix, Three Dog Night, Pink Floyd and Led Zeppelin . . . on one stage, for one night. Well, it's coming to Tampa . . . in a sense. Actually many senses. The Flashback Tour, featuring the Mystic Orchestra comprised of 30 of the best musicians from around the world, is a unique classic rock show that promises to stimulate many senses by presenting some of the best classic rock songs from the late 1960s and early '70s. Promoted not as a concert, but a classic rock "experience," the Flashback tour will use state-of-the-art sound and lighting, and a cutting-edge multimedia and special effects show, to re-create an era in music.

During a recent interview, Rick Bowen, producer and brainchild of the event, shared his thoughts on how he was initially inspired to develop the concept for the Flashback tour. "I was privileged to see the Trans-Siberian Orchestra, and it's like I had an epiphany coming back from the concert," he said........

The Trans-Siberian Orchestra similarly uses an extensive light show carefully choreographed to the music. Bowen ran with his idea, obtaining the necessary funding and assembling a group of hand-picked musicians. "The big thing was going all over the world to get the best musicians I could get. We want to present the music in a fashion it's never been presented before," he said.

The technically honed group of musicians includes Phil Hilborne, who has been a part of more than 600 performances of the Queen musical, "We Will Rock You," in London. "It's great to play music you grew up with and do it justice . . . and it's quite a task, I assure you," he said.

Producer Rick Bowen spent his time in the early '70s promoting rock bands throughout the southeast, including former hit machine Three Dog Night. So when looking for a lead male vocalist, he called upon Chuck Negron, former lead singer of the band. "Chuck is a good old friend of mine. I promoted him in the '70s . . . and with over 25 hits, I felt he would best represent the pop iconic music of the era," Bowen said. During the roughly 2½-hour show, Negron will sing some of his hits, including "Joy to the World" and "Celebrate."

The Flashback tour focuses on classic rock and reflects a favorite time for Rick Bowen, yet Bowen and other members of the band are quick to point out the band is not a tribute band, but a tribute to the music. "We're not a tribute show, not a cover band . . . we're pretty much sticking to the original arrangement of the sound though," Bowen said.

Guitarist Phil Hilborne shared Bowen's thoughts, "On some stuff, we play note for note, exactly like it is on the record, but on some songs, like the Hendrix stuff, he would never play the same thing every night, so we just try to capture the spirit of the music and play more style than note for note."

"These guys have studied this stuff to the point where it will sound incredibly authentic, but the music quality itself will be just jaw dropping," Bowen said.

Fresh off her starring role in the national off-Broadway show "Love, Janis," Katrina Chester, daughter of legendary session drummer Gary Chester, lends her strong and soulful vocals to the tour, singing classics such as "Piece of my Heart" and "Mercedes Benz." "I consider it a real honor . . . she (Janis Joplin) is the only female of that era that had been really successful in rock and roll at that level," Chester said during a recent interview from her New York home. Chester shared her excitement about being a part of the Flashback experience. "The concept is ingenious. There's nothing else like it our there, and I don't think they're ever will be," she said.

Although many of the faces in the Mystic Orchestra may not be recognized, the songs certainly will. Other classic songs you can expect to hear include Steppenwolf's "Born to be Wild," Deep Purple's "Smoke on the Water," Rod Stewart's "Maggie May" and Derek and the Dominos "Layla."

Even with all the talented musicians Bowen has assembled, Flashback promises to be more than a sum of its parts. "The idea of this show was not to make the show about the individuals, but about the music. That's why I imported musicians from Spain, Switzerland, England and Australia to be in this band. You're gonna just be freaked out by how good the music is in this thing."

Hearing Bowen's enthusiasm might compel you to immediately fire up the stereo and play some classic rock, although what would it be without the quad 225,000-watt surround sound system, laser light show and high definition video screens . . . those who attend the show will find out.

I have been to many concerts over the years and this is certainly one of the best experiences I have had. An amazing collection of tallent which comes together to create a musical, visual, lights/lazers and truly fantastic overall experience. Don't miss out, go see for your self!!!!

MYSTIC ORCHESTRA - PIECE OF MY HEART

For More Video clips go to 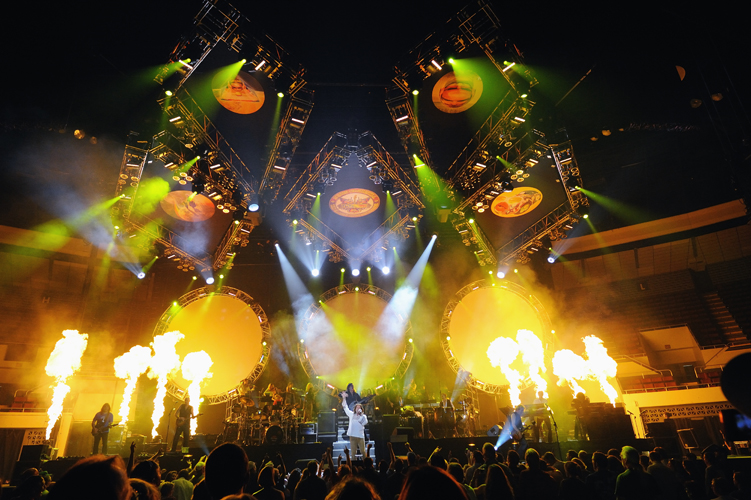