Yes it's soon Passover again, who would have thought of this though

James Cupples will be taking part in this years 2012 THE VOICE
in Australia on May 14th - Only Views in Australia will be able to
watch the programme. On behalf of all his fans in the USA and the
UK. We wish you all the luck and are with you all the way !

Up close with Paul Rodgers

Deep down, he's always been a soul man.

This year Paul Rodgers - long admired as one of rock 'n' roll's most righteous belters - intends to seal the deal.

The 62-year-old performs at the Royal Theatre Sunday with his backup band. Rodgers earned international fame as frontman for such bands as Free, Bad Company, The Firm and - more recently - Queen (filling in for the late Freddie Mercury).

The British-born singer, who lives in White Rock, says he's in the midst of doing a Stax-style soul album with guitarist Steve Cropper. Recording such a disc is a long-held ambition, Rodgers said.

Cropper became legendary as lead guitarist for Booker T and the MGs. They were house band for Stax Records, the storied Memphis label that produced such artists as Otis Redding, Wilson Pickett, Sam and Dave, and Eddie Floyd. Recently, through a mutual friend, Cropper asked Rodgers if he would sing on a demo song.

Rodgers, interviewed from White Rock, says he and Cropper hope do a CD tribute to Stax Records, with recording starting as early as May. He'd like to cut it using vintage recording equipment at Royal Studios in Memphis, home to historic soul sessions by Al Green, Chuck Berry and Solomon Burke.

"Those [soul singers] will never know what they did to me. When I was 13 and 14, I heard Respect and A Change is Gonna Come and You Don't Miss Your Water," Rodgers said.

He plans to assemble a core band with Cropper and invite "as many as possible" of the people affiliated with Stax to perform as guest artists.

Rodgers is one of rock's more successful artists. Bands he has been involved with are estimated to have sold more than 125 million albums globally. Rodgers's distinctively raspy vocals are a staple of classic rock radio, heard on such tracks as All Right Now by Free and Bad Company's Feel Like Makin' Love and Can't Get Enough.

The singer promises to reprise all the big hits when he plays Victoria, backed by a band of White Rock musicians.

"I like to see a happy crowd and I think people like to hear the things you're well known for," Rodgers said.

He recorded and toured with Queen from 2004 to 2009, with the act billing itself as Queen and Paul Rodgers. While the collaboration led to a 2008 studio album, The Cosmos Rocks, Rodgers said he won't perform Queen songs this weekend because "I don't really feel their material represents myself."

Last year Rodgers, who has lived in Canada for 15 years, became a Canadian citizen (he even sang O Canada at the swearing-in ceremony). He married Kereluk, a former Miss Canada, in 2007. The couple divide their time between White Rock and a Christmas-tree farm overlooking a lake in the Okanagan Valley.

"We don't really sell [the trees] to be honest," Rodgers said. "But it creates a wonderful woods to walk through."

He likes White Rock. And it seems he enjoys a degree of anonymity in his adopted hometown.

One day, Rodgers was walking along the beach when he heard a man playing guitar. The musician sang a Bad Company song, either Feel Like Makin' Love or Shooting Star (Rodgers cannot remember which).

"He was doin' pretty good, you know. I said to my wife, 'I'm gonna do this.' She said, 'What are you doing?' I sneaked up behind him. And when he came up to the chorus, I joined in. He sort of half turned around and said, 'Hey, you're pretty good.'

The vocalist says he long ago abandoned the hedonistic rock-star lifestyle he led in the 1970s. Rodgers exercises regularly (cycling, walking, lifting weights). He takes care of his throat by sipping herbal tea and, if necessary, gargling with salt water.

He still loves to sing.

"It's always very exciting for me to perform," Rodgers said. "I think that's why I do it. As soon as it stops being exciting, that's when I'll hang up my rock 'n' roll shoes."

http://soundcloud.com/drew-ferreira/paul
Grahams Number of Atlanta will be opening up for Paul Rodgers in West Palm Beach Fl, Friday May 4th 2012
Fans will be meeting up at the festival

Those of you attending, please email me so I can get your name

and let you know when and where we meet up

This is NOT a meet and greet for Paul Rodgers

Of course those who wish to meet Grahams Number - No passes required :-))
www.sunfest.com

PaulRodgers_sm.jpg
Event Starts at 08:00 PM
Saturday, March 17, 2012
Red Robinson Show Theatre
Musicians and critics worldwide have dubbed Paul Rodgers, THE VOICE. Never before has any artist led three bands to international success in addition to creating a successful solo career until Rodgers. He is undeniably one of musics most distinctive vocalists. Rodgers first shot up the international radio charts with his 1970 rock anthem, All Right Now with the band, Free who  along with Led Zeppelin  were the biggest grossing British act. After the bands break up in 1973, Rodgers formed Bad Company who went on to earn six multi-platinum albums. Their hits include Feel Like Making Love, Cant Get Enough, Shooting Star, Bad Company, Run With The Pack and Rock n Roll Fantasy. After leaving the group in 1982, he released his first solo album, Cut Loose the following year. In 1984, he teamed with Jimmy Page to form The Firm which resulted in two albums and the hit singles Radioactive, Satisfaction Guaranteed and All the Kings Horses. He later formed The Law with Kenney Jones  former drummer for Small Faces and The Who  in 1991. Their hit single Laying Down The Law was written by Rodgers and ranked #1 on Billboards AOR charts. His Grammy nominated solo album, Muddy Water Blues was released in 1993 and celebrated his blues roots and respect for Muddy Waters  one of Rodgers primary influences. In 1999, he won the Lifetime Achievement Award from the Los Angeles Music Awards Association. Paul Rodgers will be performing for one night only at Boulevard Casinos Red Robinson Show Theatre on March 17, 2012. Tickets on sale Thursday December 8 @ 10AM

>center>
I'm 64, proof it's not that hard for the average person to be in shape into old age. And the better shape you're in to begin with the slower the decline from a higher starting place. And it's all a lucky side effect from wanting to feel good every day It's all because long ago I found out the difficulty with exercising is psychological, not physical. It's natural to resist exercise at the end of the work day when you think you're tired. Our bodies aren't adapted to an environment where 'sedentary exhaustion' is a factor. But there are some psychological tricks you can use to overcome this.
**********************************

YOUR GOING TO HOLLYWOOD - YES ! 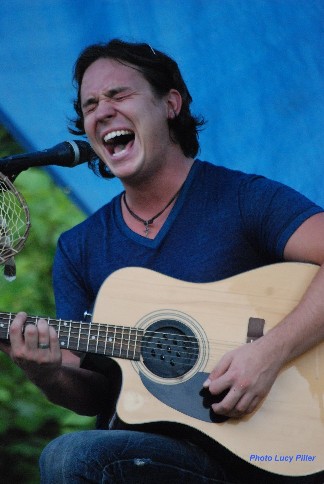 This Evening I saw for the first time

What a nice bunch of guys they were too. 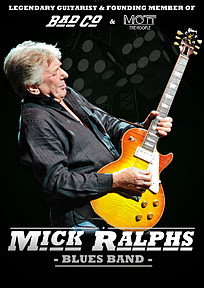 Mick Ralphs, a founder of two iconic rock bands and still touring with both, takes time out to explore his blues, soul and funk roots. The Bad Company and Mott The Hoople guitarist is joined by some of the best-known names on the current blues scene to play blues and R'n'B favourites - from B.B. King and Otis Rush to Robert Johnson and Sonny Boy Williamson - alongside fresh interpretations of some of Mick's own classic songs. -- a pair of organization that support the humane treatment retired racehorses.

Meanwhile, the celebrated Bad Company and Free singer has scheduled his first three concerts of the new year.

Here are all his confirmed tour dates, according to PaulRodgers.com:

IF you have already purchased the new song by Paul Rodgers and Perry A. Margouleff Paul Rodgers has released a new studio recording that is available exclusively on-line via CD Baby, and all other digital retailers. The song "With Our Love" has been shared with fans and the public on his 62nd birthday, with one hundred percent of the proceeds earmarked for the charities The Racehorse Sanctuary & Rocking Horse Children's Charity and Seraphim 12 Foundation. The composition was co-written and performed by Perry Margouleff, whose friendship with Rodgers dates back to over twenty years ago when they met in the U.K. while Margouleff was performing with The Pretty Things. They have collaborated over the years.

All of these charities are organizations Rodgers has offered significant support to in the past, in fact he is a Patron of one while Perry Margouleff is a Senior Board Member of the other. Rodgers shared, "Horses are such a powerful part of human development and have been since the early ages. We humans owe them so much. My wife Cynthia and I have visited both sanctuaries and can't imagine any of these healthy vibrant beings being sent off to die. Especially Seraphim 12's 'Daisy,' who was to be slaughtered for human consumption at four months of age! Or ex-racehorse 'Mr. Streaky,' who due to human error developed anxiety and fear issues which now after eight years he is finally starting to overcome, and in doing so is helping the autistic and inner city kids who visit the sanctuary. Blues great Willie Dixon believed that 'Once we know better we can do better'...so now that we know better, let's do better."
0.017257700276328225
With Our Love
Paul Rodgers

With a track from PAUL RODGERS on 3rd cd

Chimes of Freedom features a stellar and diverse group of artists across the generational and musical spectrum.
The performers, including many of Amnesty International's longtime supporters, range in age from  Miley Cyrus, 19, to folk music
legend Pete Seeger, who, at 92, records Dylan's poignant "Forever Young," with a children's chorus. The diversity of the musicians and musical genres -- from rock, rap, hip-hop to pop, folk, country, jazz and blues --
attests to Amnesty's depth of support in the music community, the universal appeal of the core message of human rights,
and the breadth of Dylan's impact on culture. Almost every track on the album is being released for sale for the first time* --
except for the title song, Dylan's original 1964 recording of "Chimes of Freedom."  4 CD Collection: $24.99 Full Digital Download: $19.99