Intermission with Flight of the Conchords

You just have to laugh!!

Press  below to hear

Brazil's No One Tribute band

The Black Dog band pays tribute to some of the greatest classic rock bands os the 70..s, specially the studio work of Led Zeppelin.

Formed in 1995 in Rio the Janeiro, Brazil, the group almost imediatly caught the admiration of legions of loyal fans and followers who never saw Zeppelin live, onstage since they never played South America in their heyday. The fidelity of the interpretations is due to the incredible resemblance of their singer..s voice with Robert Plant..s voice in his early days, and the fact that all members are multinstrumentalists. Their shows capture the spirit and atmosphere of 70..s Hard Rock, with three hours plus sets that leave audiences breathless, dazed and confused. This band chemistry is fantastic and is one of the remarkable aspects of the group. Besides a truly Zeppelin acoustic set they also play songs by other Hard Rock acts, mainly Deep Purple, Jethro Tull, Stones, Jeff Beck instrumentals and sometimes music by french violinist Jean-Luc Ponty-

Sitting on the Dock of the Bay

and took my first backstage photos.  Note :- Photos on cd sleeve are not from these shows. 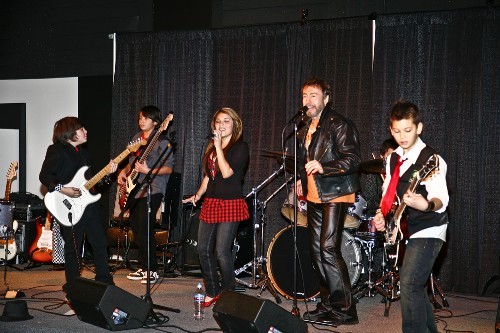 Introducing a new artist I am working with
Lots of news to come on these fantastic guys !!!
Singer Jose and Guitarist Anji

Visit them at
www.myspace.com/josemanzano.com
Do you dig them?  - If so write  to Lucy@allrightnow.com
Spanish Singer Jose Antonio Manzano is beeing away from the worldstage for to long in the last couple of years. Being the lead singer for some of the best spanish bands like Manzano, Banzai, Niagara etc., brought him to play the Monster of Rock Festivals in Spain, opening up for Whitesnake. Moved to Switzerland, he joined the band Emergency, which album became great reviews worldwide. In Spain he is still named the best rock singer in the land.

If things work out I plan to attend this event, I had asked Paul Rodgers to donate some items for a raffle

He kindly  donated 40 items to the Convention to be raffled

More details about the convention can be read here -

I am pleased to announce this year's Convention. I am very excited by the fact I am going back to what was the original home of the Free Convention between the years 1987 and 2000. I am hoping that there will be at least 1 special guest appearance present. The event will run through to on the Saturday morning as this final hour marks the official 40th Anniversary of Free's first get together at the Nag's Head at Battersby on 19.4.1968 .
Planned itinerary:
The sensational 'Get Vegas' band. Turn back the clock 40 years and here we have a band
whose average age is around 19 years old writing blues rock music in the vein of Free a fitting way to
commemorate the 40th Anniversary, their youthful energy and great songs could make this band huge. Miss them
at your peril. For more on this exciting band go on you tube & my space and then book your ticket!!!
9.15   'Basing Street band' - great singer and good band went down well last year
9.50    'Free Spirit'   (includes Nigel Robinson previously with The Outfit )
fabulous band who went down a storm last year , and in my opinion would give any tribute band a run for
their money. A great vocalist who swaggers  in the cocky Rodgers  mould another very exciting prospect they are
allowing Nigel Robinson to jam on a few numbers this is going to be quite a  spectacle for a one off occasion
11pm   'Heavy Load'  - great live band who I know will make this an occasion to remember
12pm  special guest spot  included in end of night jam

Due to higher costs in going back to the Park Hotel I need to price the event right to cover costs and cover any costs of special guests which at this stage I can only say might happen. Ticket prices are£12 in advance prior to the gig and £15 on the door. As a past Convention supporter you are being given the first opportunity to apply before the general public, unfortunately I won't be allowed to let more than the capacity in, Please make cheques payable to Bill Flynn and kindly enclose a sae with the appropriate postage.  Tickets will be sent out in early March Last year's Convention raised £1300 for the Northern Brainwave appeal. All profits from this year's Convention will be going to this cause it is a fantastic cause for us all to be associated with. I am dedicating this year's event to my dear and closest friend who died suddenly on

The 2006 Convention performance  was probably one of the great Convention concerts, featuring great sets from 'FREEWAY' and 'HEAVY LOAD', I cannot recommend the DVD of this concert too highly to you, I find that I revisit the DVD regularly, when I want some 'Free' adrenalin in my veins! . I have a limited number of these DVDs available at £12  including p&p once they are gone there will be no further copies made, I have not recovered my costs in having this produced, so would appreciate anyone who orders a copy . The DVD also has a great cover/and also is a picture disc, again I will be supporting the Brainwave appeal through profits from the sale of the DVD -a stunning addition to your Free collection.

I would be grateful to anyone who can get the event a valuable mention in Newspapers on Radio Stations and Internet sites. Please let me know if you can help
PLEASE KEEP THE CONVENTION ALIVE BY YOUR SUPPORT.

For ticketed  Visit The Clubs ticket sales counter located at front desk check-in,
The Cannery Box Office at 702-617-5585 or toll free, 1-866-287-4643 Ticket prices do not include tax and applicable fees.
No more information at this time
More will be posted on ARN