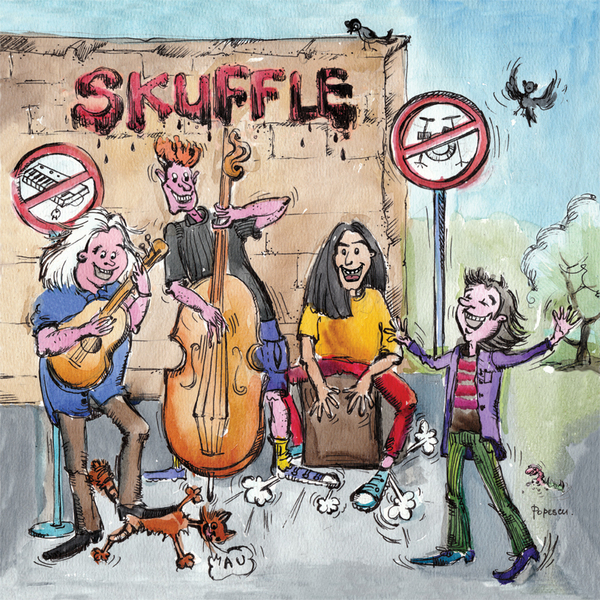 A long time ago Geordie Skuffle was playing his guitar in the pit of the enormously successful West End show "Cats" when soaring above the chorus he heard the astonishing voice of young Sean Kingsley, They knew they were destined to make records together but both continued to make a living whilst time rolled mercilessly by.

Around the same time Geordie Skuffle visited the orchestra of the iconic seventies show "Fame" where he encountered the future Skuffle Box Skuffle. Their early relationship almost foundered when Shan, as he was then known, attacked Kevin, as he was then known, with a rubber chicken during his moment of guitar hero glory. (Fortunately hilarity prevailed).

A few years later Kevin on holiday with his family in Barcelona was walking through the old town when he heard groovy drumming emanating from a shop doorway. Inside he discovered his Skuffle Box being played by the local drum-shop assistant.

Now the Skuffle Box is an old cheap Peruvian instrument of rustic manufacture which found it's way to Spain and the Flamenco fraternity during the nineteen nineties. They call it Flamenco Cajon (not to be confused with Cojon, most often seen in plural form Cojones). Cajon translated means box therefore Flamenco Box but Cajones can also be used to mean Chest of Drawers. (You can make up your own jokes). Kevin brought one home via Easy Jet who kindly allowed it a seat, causing a near riot with an American woman who seemed desperate to sit next to him. You can hear the freshly named Skuffle Box on most tracks of the CD.

More time passed and Kevin again sitting in a west end pit now accompanying Patrick Swayze in "Guys & Dolls" amused himself in the interval playing rock tunes on his acoustic guitar. When the incumbent Double Bass player joined in (for a laugh) something finally clicked in Kevin's brain.

That weekend at a barbecue hosted by Lise Taylor-Vebel, Web designer, Artist, Photographer, and Graphic Designer for all things Skuffle related, (just a few of her many talents), Kevin broached his idea for Skuffle with Bass player Steve McManus who was instantly hooked on the sheer genius of the concept. Legendary rock songs played totally unplugged. Within minutes Bass McSkuffle was born and a course of action set into motion that could change the way Rock music was perceived and performed.

Here are sixteen of rocks greatest iconic guitar based songs performed by Skuffle in their own unique style. We hope you are inspired to revisit the originals, buy or build your own Skuffle box and get rockin with your mates.

Now is the time to Skuffle, 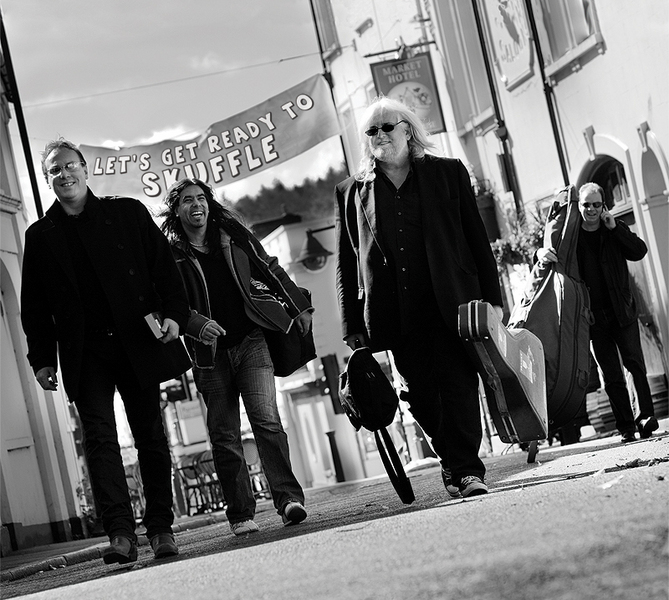